Note: Little Brother is available as a free ebook download. 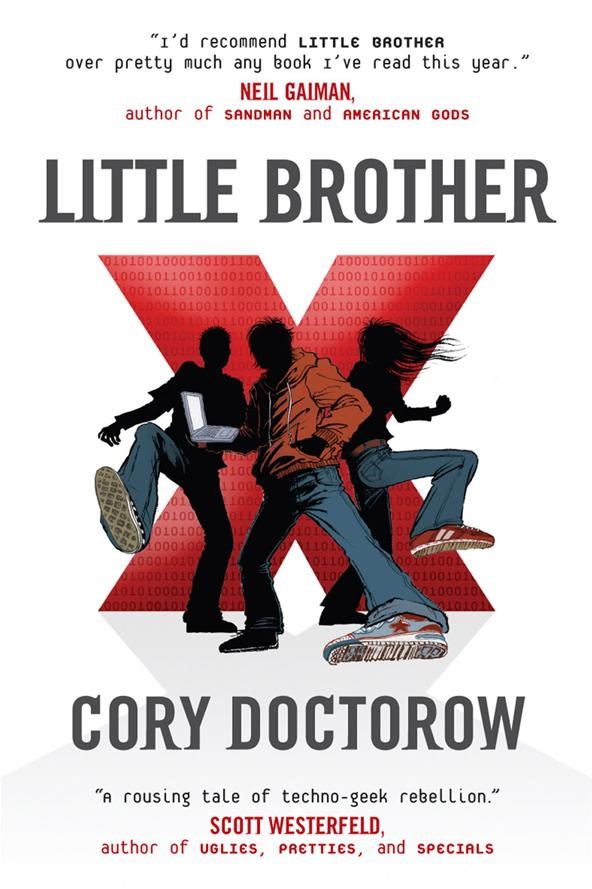 Marcus is a typical high school nerd who's figured out how to evade his school's invasive security system to cut class and play an online game with his best friends. They're caught in the wrong place at the wrong time when the Bay Bridge in California gets bombed and he and his friends get rounded up by the Department of Homeland Security. They're held without charge for a few days, questioned, tortured, and released with a warning not to speak to anyone. When they're released, they realized that one of their friends, Darryl, is still being held. Marcus decides then and there to take down the Department of Homeland Security, using open-source software and Xbox in order to get his friend back.

I think I would have loved this novel if I were 13. It's an engaging story of teenage rebellion against authority, but the politics and the infodumps kept distracting me from staying in the story. There are several plot holes and the whole thing reads like a wish fulfillment fantasy instead of a well-thought-out fictional world. It's also way too similar to our current world for me to buy a lot of it.

The story's premise of rebellion is totally undermined by the ending, in which Marcus' problems are resolved by him going to his parents. And inexplicably, the SFBG, an alternative weekly that's distributed for free in the Bay Area. This part took me completely out of the story, because I grew up with this alt-weekly, and used to take it home after school sometimes to read the stories, and occasionally, acts of investigative journalism. Nobody in the real world takes alt-weeklies seriously - they've been fighting a battle to stay relevant and not go bankrupt for the past two decades. I'm supposed to believe that they can actually affect the feds with accusations of a conspiracy?

What I hated most, though, were the infodumps. This problem seems to be endemic to a lot of sci-fi novels, and occasionally some authors like Neal Stephenson can do them well, because they're working out some fictional problem, or they're using the infodump to advance the plot. Doctorow's infodumps do neither, and they're mostly explanations of things that already exist in the current world. How boring. Do I need to know what DNS is and exactly how it works? Not for this novel, no. At least they're easily skippable.

Mostly, though, Marcus' acts of rebellion keep backfiring on him. He releases a Linux distro to his friends and it gets infiltrated by DHS. He agrees to an online interview with Fox, and surprise, surprise, his remarks get taken out of context and he's portrayed as dangerous and crazy. Instead of taking this to its logical conclusion, in which Marcus gets caught and shipped off to Syria or something, he gets saved by the California government kicking out the DHS. Which is totally illogical because in America the federal government supercedes the state one, and the feds wouldn't just roll over and say, "Ok, California, whatever you want."

Want to master Microsoft Excel and take your work-from-home job prospects to the next level? Jump-start your career with our Premium A-to-Z Microsoft Excel Training Bundle from the new Gadget Hacks Shop and get lifetime access to more than 40 hours of Basic to Advanced instruction on functions, formula, tools, and more.

Other worthwhile deals to check out:

Join the Next Reality AR Community

Get the latest in AR — delivered straight to your inbox.